These were the final holdouts of 2013 and still in bloom last weekend, despite many frosts. They are shriveling up, but even that biting rain and cold just before Thanksgiving hasn’t been able to quite finish them off and turn them black.

This low-to-the-ground black-eyed Susan’s microclimate is tucked behind a clump of ornamental grasses and by the garage downspout. Nearby black-eyed Susans were caught by the first frost a month ago. 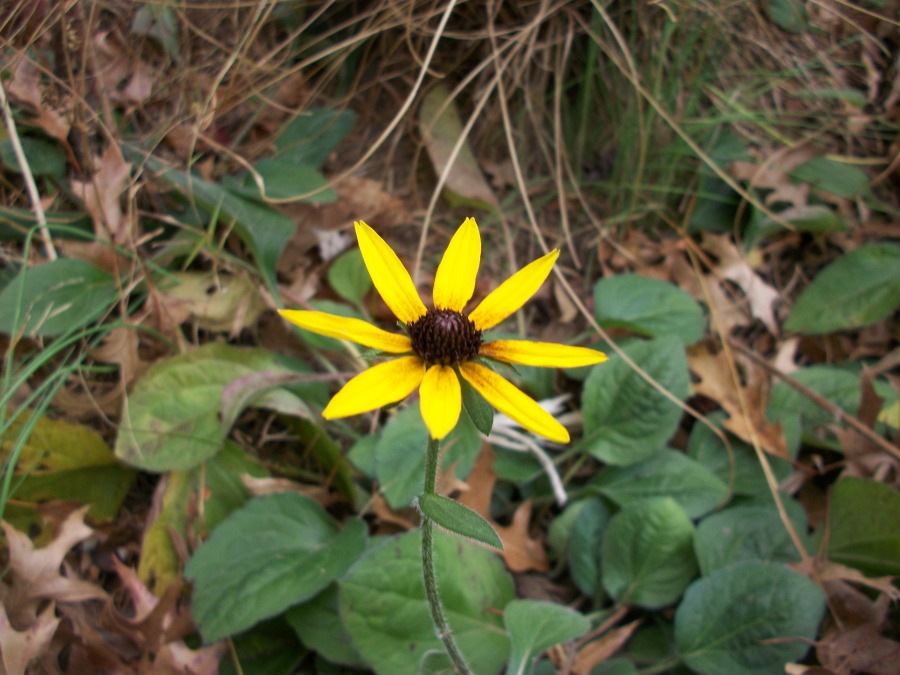 The pair of asters was protected by other perennials that had died back. I wouldn’t have found them if I hadn’t been doing some fall clean-up. Like the black-eyed Susan, they are on the small side. Unlike it, these didn’t have that pop of color. 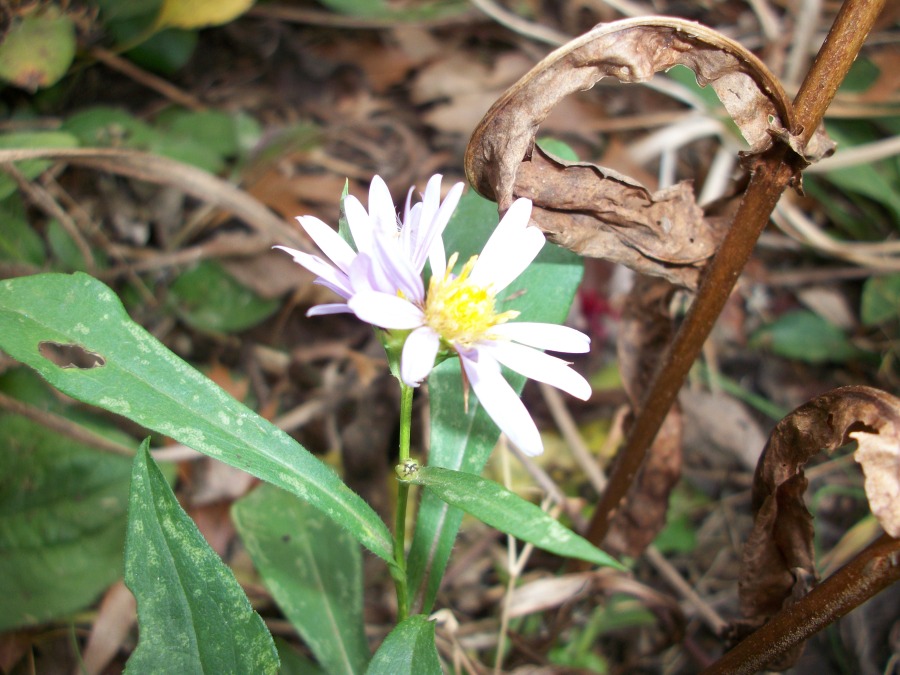 Finally, I found a couple of vinca flowers in a shady bed on the north side of the house, in a narrow strip between the air-conditioning unit and another wall of the house. And the flowers are even lower to the ground than the other examples. All the hostas on the other side of the air conditioner have died back, of course. 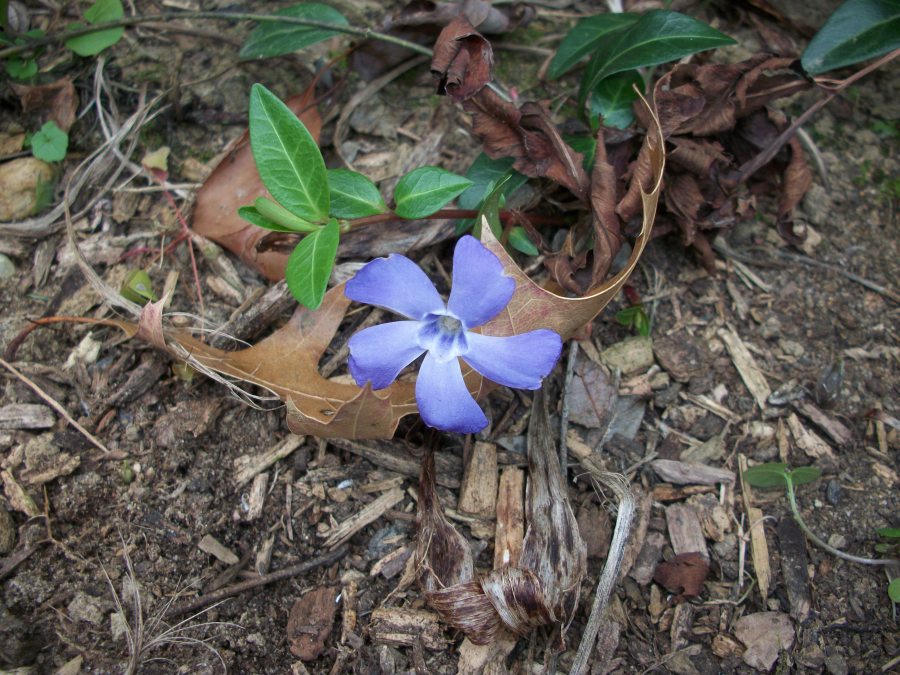 Now it’s time to wait for the lenten roses that share that space to give us some winter color. 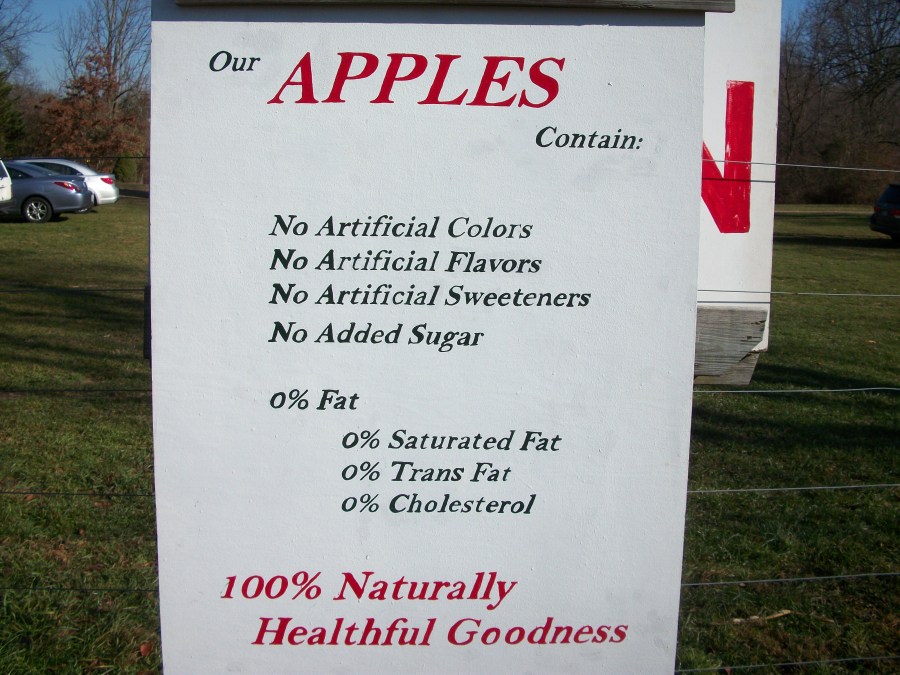 My third type of harvest, and my good deed for Thanksgiving to boot: Gleaning apples in support of New Jersey Farmers Against Hunger.

The Brit and I were part of a relatively small group of volunteers who descended Saturday on a pick-your-own apple farm in northern New Jersey. The farmer said he’d had a great year, but there were plenty of apples still on the trees and yet more good ones on the ground. The goal was to collect enough apples for other people to pack into mixed bags for food pantries to hand out for Thanksgiving. So the apples didn’t have to be the perfect “fancy” grade that you find in a supermarket. We were told to also take those with a bruise that could be cut out and used for pie or apple sauce. Here’s to hoping the recipients don’t turn up their noses at something less than perfect!

Can’t reach the apples on the tree? Some people used an apple-picking tool that kind of looks like a lacrosse stick. Painfully slow. The rest of us learned to give the tree a strong two-handed shake that would send the apples falling to the ground, where they generally survived (some did crack) and we’d recover them. Quick, but the downside was a few bops to the head from falling apples. One woman decided her basket could serve as an ad-hoc helmet, but I just took the hits. 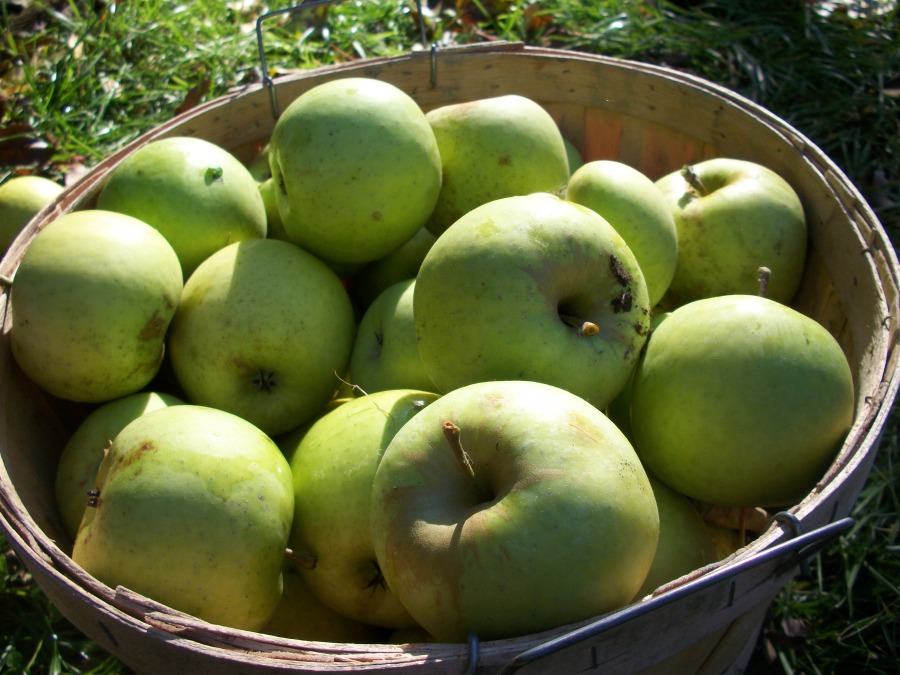 It was a beautiful day, warm and sunny, and we filled basket after basket, dumping them in turn into giant bins that hold more than 1,000 pounds. We only started to flag in the final half hour. Still, we harvested about 15,000 pounds of various varieties of apples in under three hours — a record for one gleaning there, the farmer said. And we didn’t finish. There’s another gleaning planned for Saturday.

If the apples don’t get picked, they’ll just go to waste.

And it’s still shocking how many apples already are being left to rot on the ground to turn into compost by spring. Imagine what you could d if you had a cider press!

Bonus for us volunteers: We all went home with a bag of apples. I went for the green-gold Crispins (sweet and crisp) and the red Winesap, a tart and firm heirloom variety. I made some apple crisp, but it’s time to start looking for some more imaginative recipes. 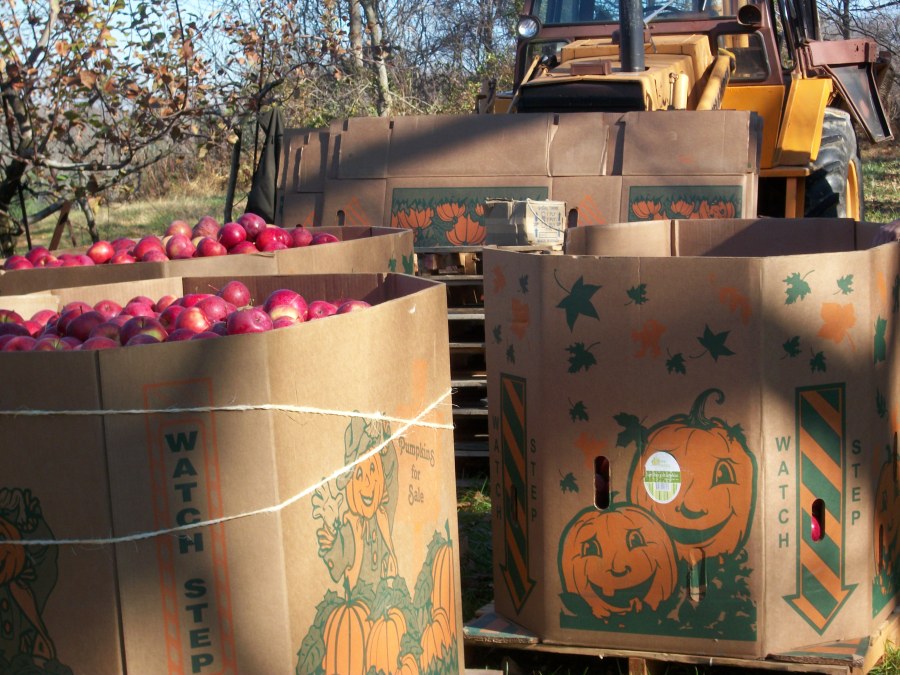 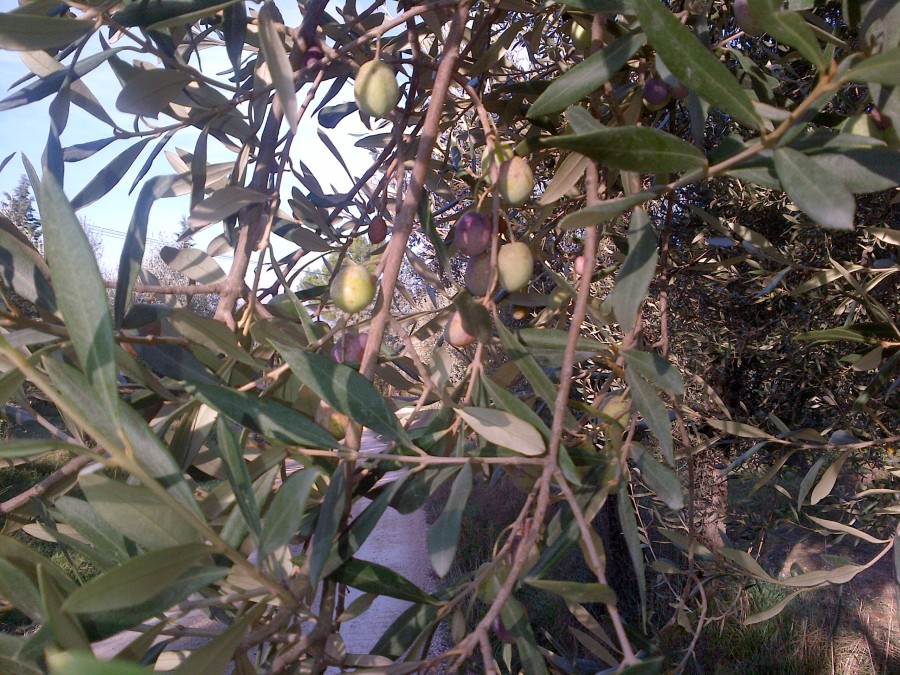 This has nothing to do with my garden (sorry), but it’s too interesting not to share: An olive harvest in Umbria.

Thanks to a friend who goes to the same spot in Italy every year, I was able to see the harvest at La Montagnola, an olive farm that also rents out really nice rooms and apartments to tourists (= Agriturismo) that is about 10 miles from Perugia in central Italy. This was an opportunity I was not going to pass up!

Once upon a time, olives were plucked from the trees manually using what’s essentially a small hand rake. But now it’s mostly mechanical, at least in this part of the world. It goes like this:

Think of an upside-down umbrella attached to a tractor that envelopes the skinny base of the tree. The tree then gets a good shake for 5-6 seconds, and the olives fall into the umbrella: 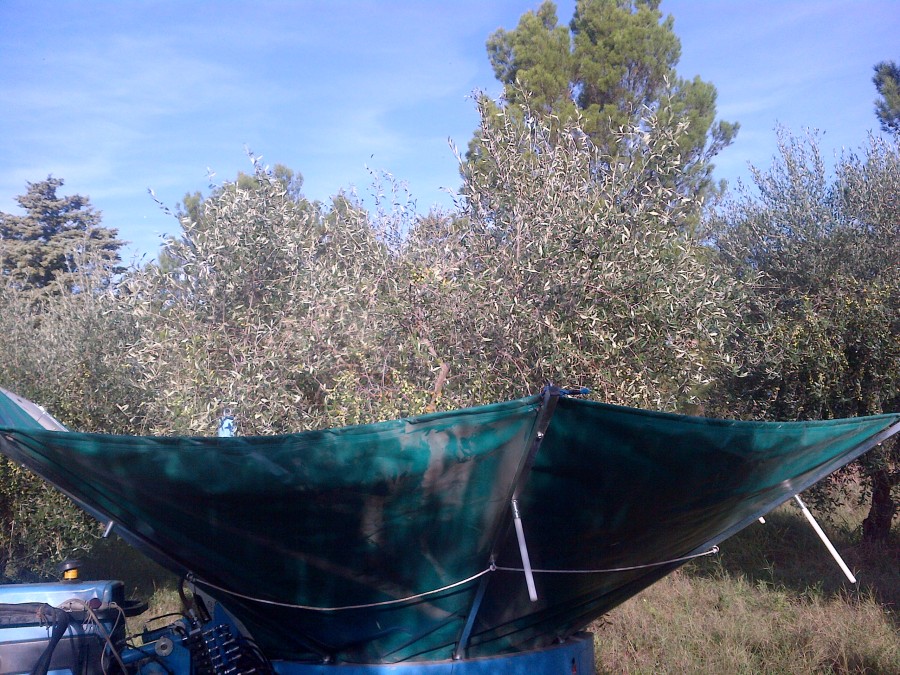 But not all olives are ready to fall. To get at the many that are still clinging to a branch, the next step uses a gadget (powered by something) with rake-like tines that loosens them, and in they fall into the inverted umbrella. 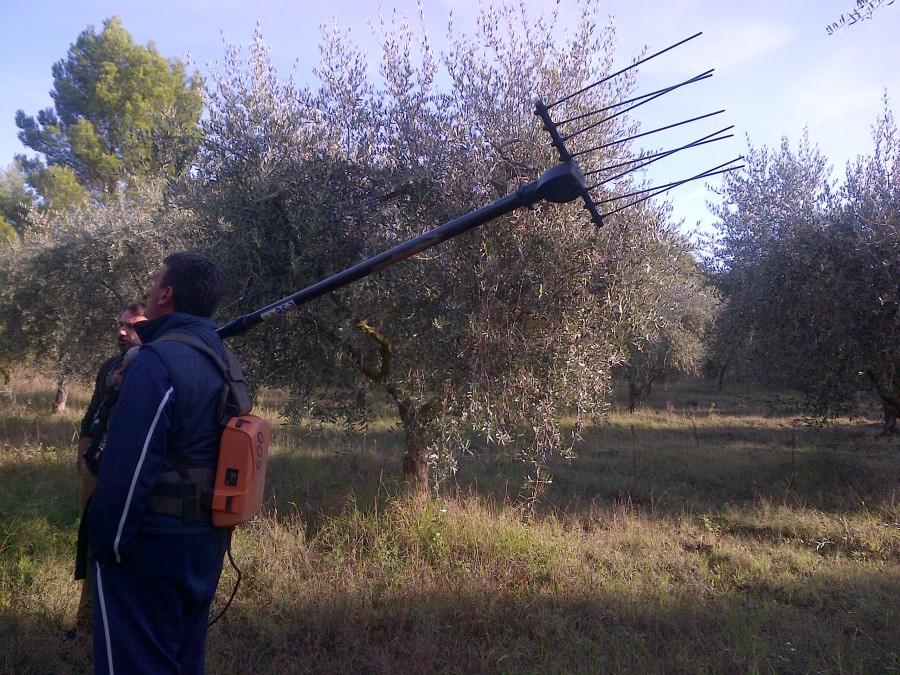 The other half of the two-person team uses an orange hand rake. It’s different from trying to detangle long hair in that you start at the top, hold on to the branch a bit up from the bottom to protect the newest growth, and work fast, rather than painstakingly attacking each knot (olive) gently.

The olives eventually all end up in the container attached to the umbrella, and it’s time to move on to the next tree.

Overall, the workers told me, it takes 5-6 minutes, maybe 10 minutes, to do one tree.

La Montagnola has 6,000 olive trees (and several varieties) in the various groves on the hills, so the harvest takes six weeks. Vittoria, the owner of La Montagnola, says each tree on average produces three liters of olive oil.

By the way, here’s the view from the part of the farm where I stayed: 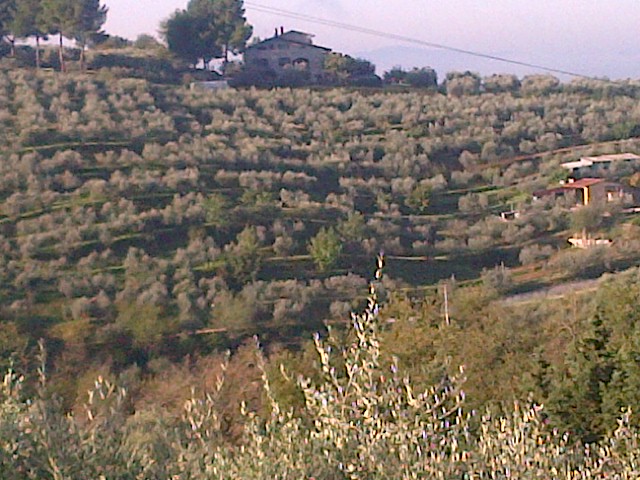 Before the advent of the machines, the harvest was done by hand. And Vittoria did let us try the old-fashioned way: Clambering up a ladder with rounded steps, grasping a branch and raking out the olives with that orange hand rake. A tarp replaces the mechanized umbrella.

Vittoria told us that the harvest can be done differently in other parts of Italy. In Puglia, down in Italy’s boot heel, it is much warmer, and olives can be left to fall naturally to the tarp below. Because they are on the tree for longer, the taste and chemical breakdown of the oil is different.

Harvesting of course is just the first part. The olives (and the bits of leaves and branches that some are still attached to) get dumped into a giant wheelbarrow-like dumpster and then into big crates, where they are then screened to get rid of the biggest pieces of debris, then washed and screened some more.

Only then does the pressing begin. The olives turn into a paste and then the liquid is extracted. The paste gets reused as a form of compost, oil and water are separated again, and you end up with a really nice olive oil: 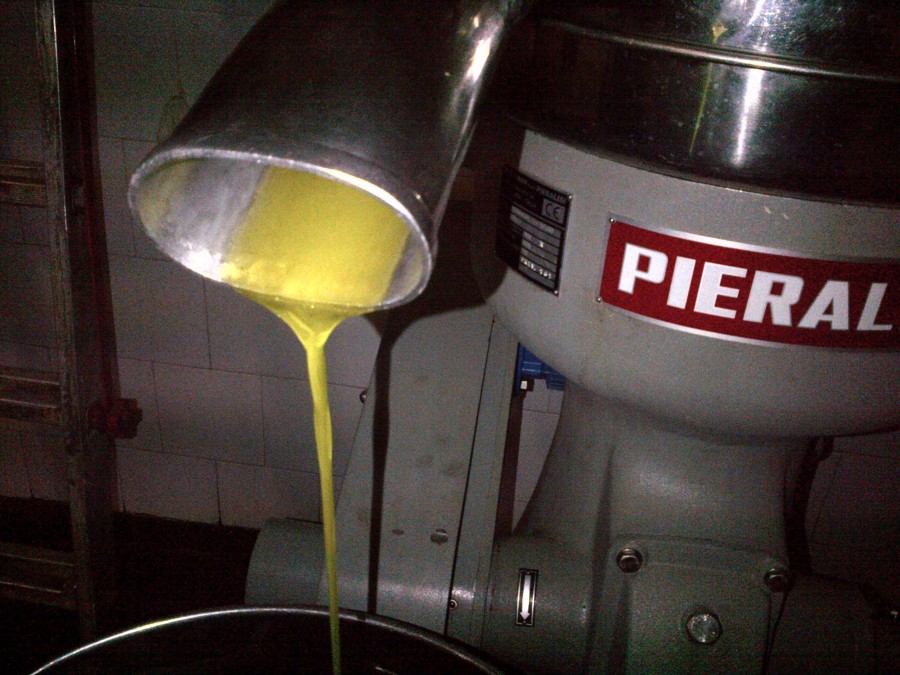 I came home with olive oil made on Friday and bottled just for me on Sunday. It can’t get much fresher than that!

Here’s my video of the harvest.

We also did an olive-oil tasting. I admit that I don’t have the sophisticated nose to distinguish subtleties (same with wine!), but there was no missing the difference between store-bought, mass-produced oil oil and its solvent-like smell and the smell of olives in Vittoria’s olive oil. Vittoria also helps evaluate olive oils so she knows how to spot the tricks and even which olive oils really can’t be from the area. 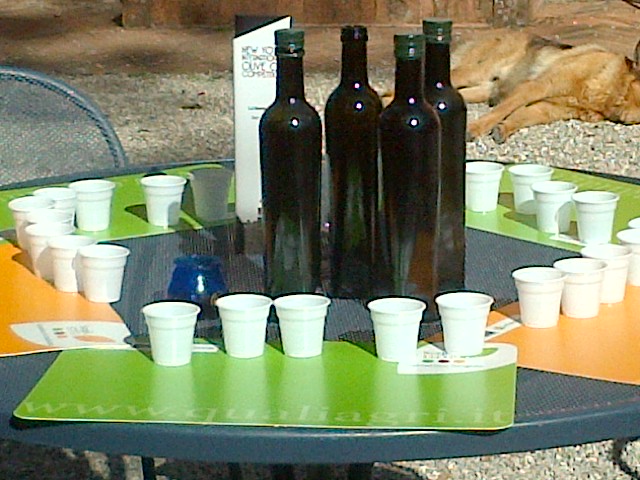 Just as with wine and grapes (or anything from your garden!), the soil and temperatures influence the final taste. Olive oils, like wine, can be a mish-mash of oil from everywhere (and as long as it’s bottled in Italy, it’s Italian, even if the olives come from elsewhere). Or it can be from one small region, with its own Denominazione D’Origine Controllata, and even be a single variety of olives, just as with wine.

One difference with wine, though, is that you want to use your olive oil when it’s young and fresh. You don’t age fancy olive oil the way you wage a fine wine. The oil I brought home is best when used by Dec. 15, 2014. (Stamped by hand on the label too!). Somehow I don’t think the olive oil on our supermarket shelves is anywhere near that fresh.