Our raspberry bushes are really bearing fruit this year! And the caging the Brit did last weekend is keeping the birds away. So far we’re getting black ones. Last year we had red ones. And I’ve been offered an everbearing raspberry plant, which we think would be a great addition.

It might even get the Brit’s mind off strawberries!

Every year, we try to grow strawberries, and every year the critters (we think mostly squirrels) get the berries first. And every year, the Brit says he’s going to outsmart them.

The strawberry plants, which began as two plants from the pick-your-own farm down the road, initially went into a raised bed and quickly took it over. We got some berries early on, and they were so delicious that we kept going for more, even as the animals started beating us to them. One year, we reclaimed the bed for tomatoes and other crops, and since then, we have used pots (and given many away). They’d overwinter in the garage and then we’d start the battles.

At first, there was peace this year. The strawberry plants grew. Then they started flowering. A few days later, the tops were munched. Thanks, deer.

So the pots went into the cold frame, cracked open with some wood to keep them from baking. The leaves started coming back, and all seemed fine for a while–til the first strawberry started developing. Something got in and had a snack.

So the Brit covered the cold frame with chicken wire and put a piece of hardware cloth under the entire cold frame to keep the more determined ones from digging their way in. That should foil them, he thought. Plants grew some more, and a strawberry started ripening. Next thing we know, something has eaten half of the berry and left the other half on the hardware cloth.

Now the mild-mannered Brit was starting to get angry. And he vowed they wouldn’t win. He found some long strips of deer netting that we used to use as walls on the raised beds, and wrapped the cold frame and chicken wire with that. 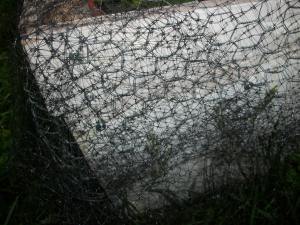 And guess what happened? Something still got in! Guerrilla warfare at its worst!

We immediately retaliated by picking berries just short of being fully ripe and letting them turn redder in a bowl in the kitchen. How were they? Puny and not particularly good. Definitely nothing like the berries that a neighbor bought from the pick-your-own farm.

So what happens next?

The Brit refuses to give in. Instead he wants to strengthen his defenses. He is even threatening to build a new raised bed (figuring berries don’t really work in containers) with its own cage top, just like he has done for greens this year. There would still be that extra wrapping of deer netting.

Can we defeat the enemy?

And so the battle continues. Anyone have any special weapons they recommend?

Several of us brought our garden (or CSA) tomatoes to the office for a taste comparison. Not that there is a bad tomato! But it was fun to see the differences, even if I lack the vocabulary to describe them. The sweetness of my sungolds got a thumbs-up, as did what I think was a Ramapo with deep red flesh. I’m already started to save seeds from someone’s green zebra tomato that I liked. But the Brandywine that someone else brought in! I want those seeds! The ones I’ve grown never tasted like that.

He also brought in Aunt Molly’s ground cherries, which he got from the Seed Savers Exchange. See the fruit in the paper husks? And the little yellow ball in front of  them? That’s it. These are part of the nightshade family, just like tomatoes, peppers and eggplants. But wow! Sweet! I would love his surplus to make some jam or pie or both. And I may have to do some seed-saving of my own (or seed-swapping). Though this blog suggests I could end up with more volunteers in my beds than I already do because they like to self-seed. Definitely one for a big pot.

We tucked our baby tree in  the basement for the winter, or so we
thought. But it seems that tiny north-facing window in the basement kept it from going dormant. When we checked on it, it was sprouting new branches and pale green leaves.

We finally conceded defeat about 10 days ago and brought it upstairs, where it has continued to grow and the leaves to darken. To us, it looks healthy. Must be all that compost that was mixed in with the soil! At least we hope it’s a good sign for this growing season. Whether we will dare plant it in the ground and leave it bundled in burlap some winter is another matter, particularly after 45 to 50 inches of snow this year (or so the weather experts claim).

We’re ready to try our hand at growing fruit, not just vegetables and flowers.
Influenced by “Landscaping With Fruit,” a new book by Lee Reich that we heard about on “You Bet Your Garden,” we snapped up a couple of blueberry bushes and a red currant plant at a local nursury’s half-price sale. Who knew that blueberry bushes turn red in the fall, offering more interest than just fruit? And both are deer-resistant.
The blueberries will go in the front yard, one near a burning bush planted a couple of years ago on one side of the driveway and the other on the other side of the drive as an extension of the flower bed near the Black-Eyed Susans. Both should get plenty of sun. We’ll have enough time this winter to plot how we will keep the birds from eating all the berries.
The red currant will go in the bed along the back deck, letting it use the railing as a trellis. This one apparently likes some shade, so this is a good location to tone down the sun. If we can keep the birds away long enough, think of the jam I can make…
We’re also thinking about pears, if we can find some and make sure we have enough room to space out a couple between two other trees. Friends had some in zone 5 and had more than enough for themselves and the animals. But maybe that’s next year’s project.

We bought a small fig tree this weekend. Chicago Hardy is supposed to be hardy to zone 6, so this could be the beginning of our fruit orchard. After consulting a fruit and vegetable vendor at the Trenton Farmers’ Market, we have decided to leave it in the pot until spring and let it overwinter in the basement. Come spring, we’ll put it in the ground. When winter comes around again, we may mulch it, then wrap it in some blue tarp to shelter it from the wind. Anyone have any tips for us?

We should soon have a bumper crop of tomatoes (as long as late blight stays away). The smaller bed, which was planted first, looks the fullest, maybe also because it seems to get more sun. This photo shows just a small portion of what’s out there today.
And you think I don’t know what to do with them all? Rice-stuffed tomatoes, gazpacho, chutney, canned tomatoes, salads … want to suggest anything else?

Alliums to Zinnias: A journey of two New Jersey gardeners
Create a free website or blog at WordPress.com.