Here’s some of what’s been blooming. I’m thrilled with all the rose campion and I’m liking how it’s mixing with other colors.

Rose campion and lavender along the front walkway:

And just a sea of yellow coreoposis:

A couple of years back, we picked up some “walking onion” bulbs during a West Asheville garden tour. This is a perennial, and we were curious what it would do. When, we wondered, does harvesting end the perennialness of this plant? And how does it handle winter?

We didn’t do much last year beyond planting a few of the year’s new bulbs. But this year the raised bed was bursting with green early on. At one point this spring, I needed an onion and thought maybe I’d find one. I rooted around with my fingers but felt nothing thicker than a leak. I guess onions don’t survive the cold. I wondered if we’d done something wrong and we wouldn’t get anything. At least the deer were leaving them alone. Perhaps a squirrel dug up a few, but we weren’t concerned about fencing in this crop. 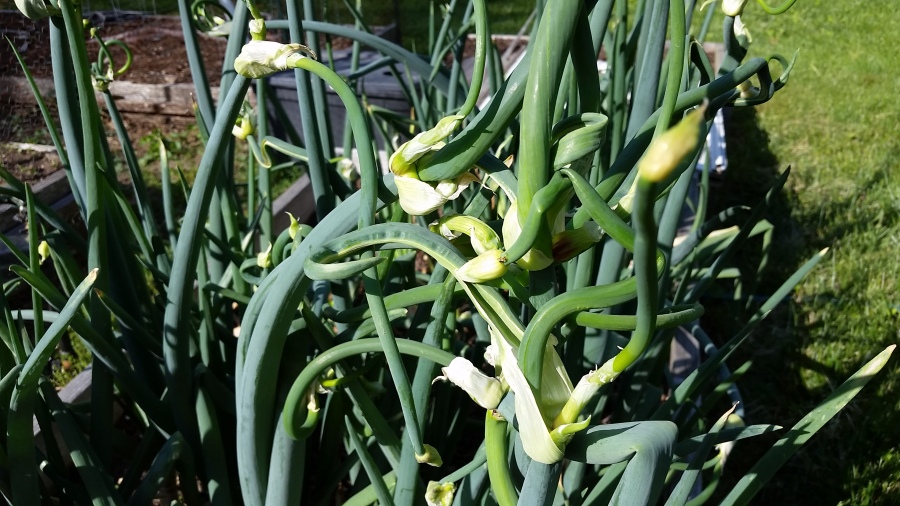 Then the stalks really shot up and twisted a bit. They reminded me of garlic, and I briefly wondered if I needed to cut them, like garlic scapes. But before I could decide, the wrapped-up bulbs at the top started opening up, and multiple bulbs were inside — sometimes three, sometimes five, sometimes even more. The stalks toughened enough to stay upright. And sometimes another stalk grew from one of those above-ground bulbs, eventually creating more.

This was interesting. We eventually pulled one out. The onion we found was more the shape of a shallot than your standard round onion. But it worked just like an onion when we cooked, and if we cut the stalk in thin slivers with scissors, we could use that instead of green onions. Sensing we would have a glut of bulbs, we started handing out a few to friends.

And then the plants flopped over.

This, it turns out, is what they mean by walking.

Left to themselves, the new bulbs will seed and start new plants. (I’ll put them where I want, thank you.) The onions are now mostly pulled out of the soil, so, yes, I think we need to harvest those.

I’m hoping that this year’s bulbs will turn into new onions next year. And I’m curious what will happen before frost — another crop? I’ll find out; I’ve already started planting them.

And it’s time to keep giving away those bulbs.